Travel in Europe with Divine Mother
By Elizabeth Kunimoto 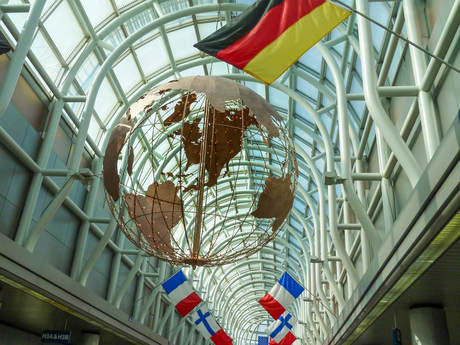 Being with Divine Mother for nearly three weeks in Europe was a privilege of a lifetime. We were able to experience a microcosm of how our beloved spiritual leader takes the Light to the world—through her Love, devotion, and unfaltering commitment to her highest vision. We could see this in the way she interacted with everyone—from the international leaders she conferred with to people she met in the United Nations—the Assembly Hall, the hallways and elevators - with a twinkle in her eyes and a radiant smile, acknowledging each person. She not only made connections with the dignitaries she had appointments with but also serendipitously with the Dalai Lama's representatives and the protocol officer of the International Telecommunications Union, whom she met in the elevator.

It was a privilege to see the communication between Divine Mother and all those who met her. Although many of the people came from academic, medical, business, or technical backgrounds, we could see the interaction shifting from a meeting of the minds to a meeting of the hearts as they were in her presence.

​Mrs. Linda Vogel of the American Embassy gave a dinner for Divine Mother, where she introduced her as "our premier guest." Divine Mother held a special meditation session for Mrs. Vogel and her guests, including her lucky group from Hawaii. Mrs. Vogel treated us all royally, taking us over the border to France one morning, where she treated us to lumpia at the open market. After a lunch of fondue, she took us sightseeing around Lake Geneva, to view the spectacular beauty of the lake and mountains, the springtime colors of the trees and flowers, and the sculptures and Roman ruins. During our last evening in Geneva, Divine Mother graciously hosted a beautiful dinner for Mrs. Vogel and us at a premier restaurant.

Even while keeping to her schedule of international appointments, Divine Mother always made time to give us precious meditation sessions and one-on-ones. The latter helped us to make tremendous breakthroughs and attitude shifts.

​With Divine Mother's help I was able to feel for the first time for the child who was sent to the Big Island twice, away from my working parents, for over a year at a time as a toddler and as a first-grader. I was able to cry for the child who grieved incessantly for her parents, yearning for the love and comfort that her caregivers in Hilo did not provide. Divine Mother helped me to give this child the unconditional love and warmth that she cried for and to forgive the caregivers who were doing the best they could.

​In another session Divine Mother helped me to tell my late father how much I loved him and to receive his love in the spirit. This adjusted the tremendous imbalance of my formative years when my mother had dominated my life to the point where I did not acknowledge the love, admiration, and gratitude I had for my father. Furthermore, I realized that such an imbalance had contributed to my being fragmented and to my inability to be wholly present in the moment. I thank Divine Mother for this awareness! Until that moment in Geneva, I was clueless about my being in denial or being cut off from these painful feelings.

After 14 magical days in Geneva, we traveled on to London with Divine Mother. This time, rather than staying in a hotel, Divine Mother took a three-bedroom, three-bath flat with a comfortable living/dining room and kitchen. This was a great venue for the five days of meditation, sharing, and one-on-ones with the Anderson family and friends. What was special about London was seeing Divine Mother in a real-life situation, creating a loving environment with flowers, "ono-licious" food and candles. We three musketeers, as Stephen, Tad and I called ourselves as we went to market, cooked, and cleaned, were invited to join Divine Mother and the Andersons whenever we could. What a joy it was to see the incredible transformations that took place within those five days.

When Divine Mother left for Belfast, Stephen returned to Honolulu and Tad and I went to Paris. In Paris we left a press kit with Newsweek International and another kit and several videotapes, including "Spirituality and Youthfulness" with UNESCO's director of the Year of the Aged.

​I could fill entire newsletters sharing about those three weeks with Divine Mother, but for now I can only thank her for those precious moments that changed our lives simply by the privilege of being with her. Why, I now have a new husband (Monsieur Honore Ton Ton) and he has a new wife (I've lightened up in more ways than one)! I thank you, Divine Mother, with all my heart.
Copyright © 2023 Audrey E. Kitagawa,
​All rights reserved.