Finding My Voice
By Gary Barlough 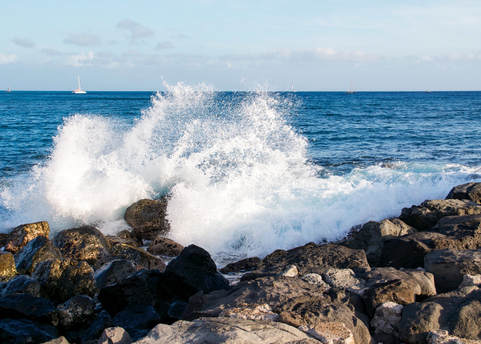 During my childhood I remember having very loving parents, and very creative desires and inspirations. My brother and I could and would make just about anything we could think of to make. As I grew older I remember that this closeness to something inside slowly grew farther and farther away.

I was raised Catholic, attending Catholic grade school, taught primarily by nuns, and then Catholic high school, taught mostly by Jesuit priests. Though I had great respect for these institutions, I left there in search of myself and in search of God. There were many teachings, and beautiful words, but nowhere did I feel the clear Light of God touch me beyond all words.

As I stumbled through my first year of college, a pre-law major, I came to realize that the vibration of music truly touched my heart, beyond all words, and so I took refuge there. I learned everything about music, from the outside-in. After fighting my desire to get a degree in the arts, my parents began to trust my inner desires because I trusted them. They sent me to the best music school within their means.

Upon graduating, I entered the world with a desire to give-out, yet I found myself slowly getting lost, time and again, in distractions that took me nowhere. I ventured every sidewalk route I could navigate, from going-nowhere relationships, to completely supporting other musicians, and becoming a very capable producer, yet never even playing a note of music from my own heart for them. I was disabled by fear and I did not even know it—imagine being blind and thinking you can see.

In 1988, upon walking into Divine Mother's presence, I knew that I was feeling something that I had never felt before, that all of God's calling cards had led me to her feet. They led to this simple woman, so completely humble and to a simple meditation, to listening to God, instead of asking for things from the confusion of my mind. I began to realize that the "inspirations" I had felt and followed all my life had slipped in while I wasn't thinking, let alone watching. They were the times I had been caught listening!

Divine Mother told me to get a particular book about the life of Sri Ramakrishna, and to read it, and then I would know her. I read the book, and I really knew. Yet I never fully appreciated the opportunity I had, and I really did not know that anything was broken inside. I thought I was doing well. She hinted to me on a number of occasions that I could be doing much more than I was doing in life, but I kept running away.

In 1996, I found myself in a relationship that was mutually very destructive. I had tried to find myself in the eyes of others for years, now I was in a relationship where the other person believed in me, so I would not have to. Further, I was not assertive, nor kind to myself, so the relationship began to completely dominate my life. I felt as if I was drowning.

I am the luckiest person in the world, for Divine Mother was right there to give of herself freely to so many of us. During a one-on-one meditation she very quickly sent the Light into a very lost and dark consciousness. I had become accustomed to years of various distractions, one right after another, one replacing the other. When one was used up, I would feel empty, and look for another. This search was for my own self-esteem and was a never-ending one because I was doing it on the outside, trying to find it from individuals who would raise my self-esteem rather than finding it from within, in my own Godself. I could see the beauty in other people's music, and could easily help to finish theirs, but I saw no beauty in the music which came from within me. I had no faith in my own music which came from within me. I had no faith in my own music. I could not even finish a song. At one point in a one-on-one meditation, I saw Divine Mother playfully dancing on a pond, and she jumped in the pond, but she had to coax me into acting by saying, "Don't you want to jump in also?" How stuck on the sidelines in life I was! Petrified by layers upon layers of fear, and negative self-talk.

Then the Light shot in! I am so grateful to Divine Mother, for she truly knew my heart. She invited me to give-out at the August Celebration in 1996, 1997, and 1998 by singing original songs. She wasted no time at all, and cleared years of distortions in a few short months.

It has now been two years since that time, and my life is a complete reversal of the running game that had plagued my life. Through God's grace, I was able to let go of that destructive relationship. I am no longer attracted to someone to lean upon. Music and lyrics flow freely, and I feel functional. I can give-out without being afraid of judgments from myself or others. I am closer to my parents and brother than ever before, and for the first time in twenty years, we all live in the same town and see each other every week. I have much further to go and difficult situations arise, but my ability to move through them in peace has dramatically risen.

​My first focus is God, and from there life flows. I have found that all inspirations are truly from divine Love. They are guiding rays, and the greatest ray of love I have ever felt is that flowing from Divine Mother. Thank you, Divine Mother, for giving unconditionally so that Divine Mother's Light, the pure Love of God, can flow out to help so many people. I am truly blessed, and I know this Light is meant for the world. ​
Copyright © 2023 Audrey E. Kitagawa,
​All rights reserved.