Divine Mother, Breaker of the Chains
By Joyce Volen 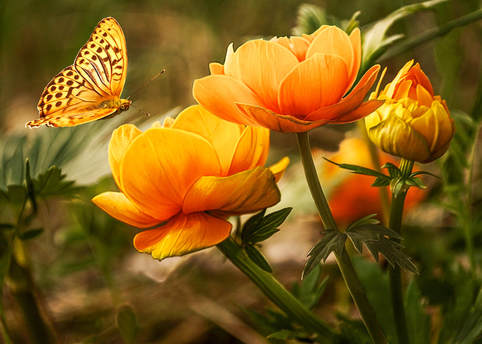 All my life I longed to know and love God. I remember as a child feeling voiceless, powerless and afraid of my father who was abusive. I remember finding refuge in my room and in crying to God for help.

Being Japanese American, I was raised Christian but accepted Eastern philosophies too. I studied and tried many different religions—always searching for a path that embraced all religions.

I was twenty years old when I heard about Divine Mother. I traveled across the state of California to see her. When Divine Mother spoke of Sri Ramakrishna, the String that ran through all the pearls (religions), how prayer was talking to God but meditation was listening to God, and how she had the key to help us realize God, I knew instantly this was the path I had been searching for. In the days that followed, Divine Mother's messages were like spiritual food to me for which I hungered. I did not have to comprehend all that she said because Divine Mother did not communicate mind to mind, but transmitted everything heart to heart. Three days later, Divine Mother graciously initiated me.

In the years that followed, I married and found myself feeling voiceless, powerless and afraid of my husband despite having vowed never to marry a man like my father, or to be like my mother. I remember being a newlywed and pregnant, crying on the telephone to Divine Mother, telling her I had made a mistake in marrying. Divine Mother was so gracious in offering to perform a spiritual marriage over the telephone. How symbolic it was that it was just Divine Mother and me.

For sixteen years, I was torn in my commitment to God and to my family. I did not always make God first because of my human attachments, which caused much misery. Yet, Divine Mother never did forsake me. She was so patient and kind, always manifesting God's unconditional Love for me. Although we communicated by phone, letter, or during her annual visits to the mainland, my relationship with Divine Mother was more in Spirit.

My longing for God grew deeper and when I finally made a commitment to God first, Divine Mother's Light seemed to move faster in my life as things began to unfold and change so quickly. Without knowing it, I had made a commitment to myself too. I had been playing the same role with my husband as I had with my father. Through God's grace, I realized I could change my role. I did not have to be the victim anymore. I could be strong and courageous in reclaiming myself.

When I changed, and started to respect myself, my husband asked for a divorce. The chains that had bound me were being broken and I was being freed from a chaotic and manic life with him. In sixteen years of marriage, I experienced being broke three times and having to start over and over and over. I moved and lived in four different homes, owned with him four different businesses, four undeveloped properties, four commercial buildings, seven rental homes, and sixty-six vehicles. I traveled a lot with him, going outward to avoid facing the truth about my life and myself.

Divorce is hard. I cannot put into words all that I went through. I still cry and scream in sadness and pain. But I also cry in gratitude because I couldn't have faced nor survived this past year without Divine Mother, who helped me to see God's grace in every experience, and who gave me the tools to go through each experience offering, surrendering and trusting in God's will. I am grateful for my spiritual evolvement and for this opportunity to have learned how to cultivate greater love, understanding and compassion for myself, and others, as I moved through all of these hardships.

I would like to share an experience with Divine Mother, which occurred the last time she was here in San Francisco, which to me reflects the essence of my life with her on this sacred path of love and devotion to God. My plate was full in every area of my life. I was just holding on, waiting to see Divine Mother. I went to pick her up from the hotel. Divine Mother turned around and saw me. Her face was so beautiful, and her voice was so loving as she greeted me. Then to my surprise, she opened up her arms to embrace me. I embraced her too. So much Love for me, and so much love for her. Later, she asked my concerns. I longed to tell her but I didn't know how to convey all of my concerns in words.

​Desperately, I looked into her eyes, which were filled with so much understanding and compassion, and I offered my heart to her. In the days that followed, I was able to write three pages of concerns. And even though I did not verbalize them, or show her what I had written, she addressed every concern that I had. Divine Mother knows my heart and my heart is hers. I feel so blessed to move through life in her loving embrace. Praise God!
Copyright © 2022 Audrey E. Kitagawa,
​All rights reserved.