Recovering from Abuse
By Kay Day 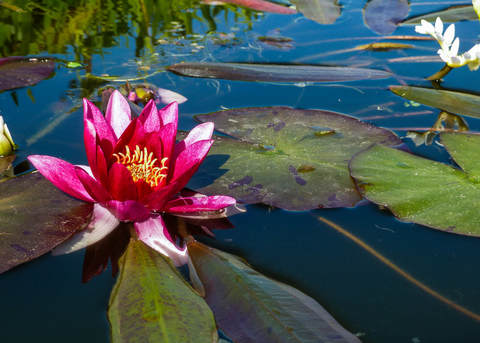 To look at the apparently normal, successful businesswoman that I appeared to be on the surface, one would never guess at the years of sexual, emotional and mental abuse that I had suffered since childhood. I had become a master of denial. Denial protected me from the pain and suffering.

​I was the second of three children born to a hard-working young couple of Japanese ancestry on Maui. My parents loved us all, but as the middle child, I felt neglected, unwanted and ignored, while my older sister (the first child) was adored and petted and my younger brother (the first boy) was placed on the pedestal of Oriental family values.

The abuse (and the denial) began at about age six, when an uncle's inappropriate touching was borne with silent horror. At age nine, I was singled out by a teacher, whose cruelty and bias turned a straight-A student into a fearful, struggling C-student. I was subjected to daily degradation and abuse. When I told my parents I feared going to school because my teacher was "mean," my concerns were ignored and I was told to go to school like a good girl. I did as I was told, silently enduring daily abuse for a year. I began to build up layers of self-defense, to protect me from a world that kept hurting me.

Old-world Japanese attitudes and values that had been ingrained in my parents—stoicism, a stiff upper lip, obedience and filial piety—were passed on to their children. But these values complicated the life of an American girl growing up in the middle of the twentieth century. As a teenager, I discovered a way to get the attention I had always craved, not knowing that it would attract inappropriate attention. I found that I could attract the attention of boys! The neglected child in me reveled in the attention and developed a precocious, flirty personality and sexy look. But the persona I cultivated would attract the wrong people, leading to more abuse; and the abusers were always people in whom I placed my trust.

Physical abuse from one boyfriend; mental and emotional abuse by another. Sexual abuse by a dentist. Brutal date rape at gunpoint. And the ultimate violation by a man who purported to be a spiritual teacher, to whom I had gone to find God. He abused me sexually and made me stop trusting God.

In every case, I never screamed, I never cried, I never tried to fight off the attacker. I just became silent and waited for it to be over. Instead of running to family, friends or the police, I just pushed it away into a deep, dark corner of my subconscious, thinking that by doing so I had dealt with the situation. I got up, dusted myself off, squared my shoulders and went on with my life. After all, I had been taught to be strong, be quiet and to cover up the unpleasant things so as not to bring shame on myself or my family. When and if I ever spoke of any of the incidents, I related the experience with a total lack of emotion, like a news reporter talking about someone else; and my feelings about the abuse were pushed so far back into my subconscious that I thought I had overcome them.

I pushed myself unmercifully to achieve—to be the best, the smartest, the prettiest, the most physically fit, the most admired, the most successful. I thought that by cultivating the outward trappings of success, I could erase or at least camouflage the horror and suffering. But nothing seemed to calm the fear and despair I felt inside.

Such was my state of denial and alienation when I met Divine Mother. I was in Hawaii for a Christmas visit from the mainland, where I had lived for several years, hoping to escape into marriage and a new life. As I walked into her home, Divine Mother looked up at me and said, "Oh, poor thing. Come in. Come in." Why did she call me "Poor thing?" Outwardly, I looked like I had it all. Although I did not know it at the time, she looked into my heart, saw my suffering and gave me her complete, loving attention and began the healing.

Divine Mother initiated me two days later, on Christmas Eve, 1987. She must have known how badly I needed her. From that moment on, I felt I had an anchor, someone who knew me, someone who accepted and loved me unconditionally. My contact with her for the next five years was by telephone and on once-a-year visits to Hawaii. Those telephone calls kept me connected. I recall pressing the receiver against my ear, with eyes closed, trying not to miss a single word, as she spoke in her rapid-fire, direct and totally focused way.

When I moved home to Hawaii, after my divorce, I began to attend weekly meditations with the spiritual family. But I focused my attention on my job, my physical fitness, my friends and boyfriends. God was part of my life, but jumbled up in a heap of other priorities.

I shifted uncomfortably under Divine Mother's clear and direct gaze. I could not see that she looked at me with love and compassion, wanting me to surrender and come to God. She gave me forthright and clear directions on how to get to the bottom of my problems, but I was unwilling to go there. I had been betrayed too many times. I could not trust anyone—not even God. Thus, I continued to suffer in denial for another few years, but I never stopped going to meditation—and Divine Mother never gave up on me.

​In 1997, Divine Mother introduced us to a process called "intensives"—all day sessions which sought to get to the root of the personal issues that obstructed each of us from knowing God. The intensives themselves evolved to sessions where we could vent our physical and emotional anguish in a safe and loving place. When my suppressed emotions were released, they emerged in violent waves of grief, fear, rage and pain. All the unexpressed anguish and trauma that I had stuffed into my subconscious came pouring out. But Divine Mother was there, her loving gaze fixed upon me, and I knew I was safe. No amount of counseling, psychotherapy or any other device of the human realm could have freed me from the bondage of fear and the years of denial. The issues and emotions were not just FACED—they were ERASED by God's Grace and they ceased to have power over me.

The transformation has been remarkable. I have shed my suit of armor, dropped my shield and heavy weapons and am experiencing life and God's Love in a whole new way. God has allowed me to "stand down," relax and enjoy life. The most significant change has been in a shift of focus, a re-prioritizing of my life, with God in the number one spot. This has simplified my life by focusing my attention and efforts on one goal—the service of God. And that service is done daily, on what Divine Mother called our "holy ground"—right where I am—in my job, in my personal relationships, in the common, everyday actions and interactions of my life. With God as the primary focus, and with utmost faith in the guidance of Divine Mother, I have lost my consuming obsession with the RESULTS of my efforts—knowing instead that whatever the result, if the task is done in reverent service to God, the result will be as it should be.

Several years later, Divine Mother gave me another incredible gift. I was feeling that my life was a bit "fractured" because my new devotion to God had become my number one priority, relegating my boyfriend Eddie to the number two spot. It never occurred to me that the two segments of my life could be one. When Divine Mother invited Eddie to join the spiritual family (and when he accepted whole-heartedly), Eddie became a part of my love of God and devotion to Divine Mother, taking our relationship (and his life) to new levels of joy and harmony. She blessed us in 2001 by attending our wedding in Honolulu.

​Since Divine Mother lovingly broke open the seals of my heart, I have given that heart wholly to God. I see now that my loved ones, my job, my very body—can only give me some temporary happiness and comfort during this lifetime. I choose to place my trust in God ... In Eternity ... For I know without question that Divine Mother will never forsake me. ​​
Copyright © 2022 Audrey E. Kitagawa,
​All rights reserved.